Dominoplay – The Regions of Italy 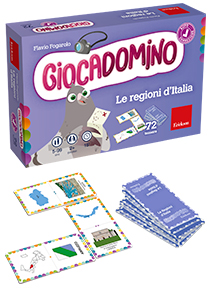 
Created by Flavio Fogarolo, expert teacher of compensatory and didactic tools for pupils with special educational needs, Dominoplay innovates the classic domino game to sustain learning in the geography curriculum area in primary school.  This box, in particular, concentrates on the regions of Italy.

In turn, the groups are divided into two levels of increasing difficulty:

From Erickson’s experience, the clever and amusing domino to learn playing at school, at home and with friends!

The series Giocadomino, created by Flavio Fogarolo, offers fun, didactic games which are variations on the classic game of dominoes, excellent for supporting learning and automatisms, especially but not only in calculations.

A DOMINO WITH A CHECKING SYSTEM! 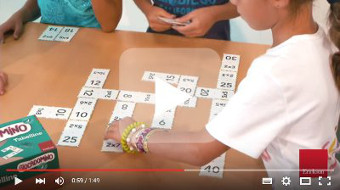 Giocadomino enables children to have instant control of the right matches: in fact, each element has a multi-coloured edge, a sort of colour barcode, which identifies the quantity represented, despite being presented under a different guise. If children try to pair up dominoes with different values they’ll realise immediately.

Thanks to the effective checking system, they can play independently without needing the constant supervision of an adult.

Offers introductory exercises on calculations with number values up to 20.

Offers introductory exercises on recognising quantities and counting up to 10.

Offers introductory exercises on learning how to tell the time.

Helps children memorise their times tables by matching dominoes with the same value..

Provides exercises on fractions and decimals, using pictures as well..

Provides exercises on the four kinds of operations with a numerical value up to 100. 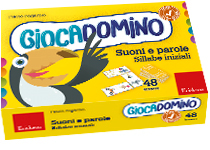 Allows children to develop the phonological prerequisites which form the basis of learning how to read and write, by concentrating on the first syllables of words.. 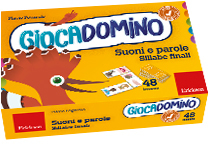 Allows children to develop the phonological prerequisites which form the basis of learning how to read and write, by concentrating on the final syllables of words. 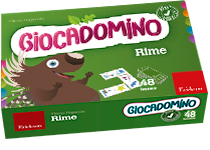 Proposes exercises for lexical enrichment with the recognition of words with the same meaning.

Each box contains 48 playing dominoes which can be chosen according to two levels of increasing difficulties so that personalised and inclusive activities can easily be organised.

Dominoplay – The Regions of Italy

Sustains learning in the geography curriculum area in primary school.