Pay attention and concentrate. You must be a keen observer.
Turn over your cards and after making a quick calculation decide what move you’re going to make, always trying to be faster and better than your opponent.
Will you be the one to bring home the most booty?

QUICK FINGERS is a game in the «Playing to grow» series, conceived by Gianluca Daffi, a university lecturer and expert in childhood and adolescent psychology. 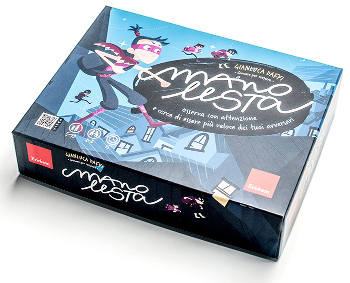 Preparation
Deal out the cards so that each player has the same number of «Action» cards and «Number» cards and divide the gold nuggets evenly between the players.

Each player puts the 2 decks in front of them on the table, as shown.

Start of the game

On saying go each player turns a card from both decks over at the same time, thus they will have an «Action» card and a «Number» card in front of them. At this point they’ll have to quickly decide what action to do and how many times.

What’s the action? Look at the «Action» cards

If the two players’ cards have the same action, they have to do the action shown on the cards: clap their hands in front.

If the two players’ cards have different actions, they have to do the action not shown on the cards: clap their hands above their head.

How many times? Look at the «Number» cards

If the two players’ cards are the same colour, they have to add up the numbers on the two cards.

If the two players’ cards are different colours, they have to subtract the smaller number from the larger one. In the event that the answer is zero, they have to shout «Quick Fingers» and not perform the actions.

The player who does the right action the right number of times first (or, in the event of zero, shouts «Quick Fingers» first) wins a gold nugget from their opponent. If both players make a mistake the game continues with new cards turned over; used cards should be put towards the edge of the table.

End of the game

The winner is the player who manages to take all their opponent’s gold nuggets or – if the cards finish – has the most gold nuggets.

Executive functions are the set of mental processes which monitor our thoughts and behaviours. They incorporate various neurological operations which are needed to control and coordinate our actions.
Put more plainly they are like a series of little gnomes who all work together in our brain, helping us execute any kind of task we might face in our daily lives.

I’m so hungry that…