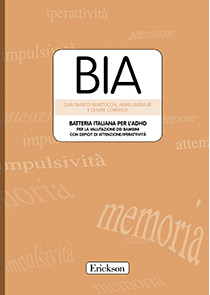 
The BIA (Italian Battery for ADHD) offers a range of useful tools for understanding the specific problems seen in children with attention deficit and hyperactivity and/or with difficulties in executive processes, in controlling responses, attention and memory.
These tools can be used for the diagnosis and specification of difficulties in children with an ADHD (Attention Deficit Hyperactivity Disorder) profile and have been standardised on a total population of more than 10,000 children.
The tests include questionnaires which observe children’s behaviour at home and at school, tests which evaluate visual and auditory sustained attention, tests which evaluate impulsive behaviour and control processes and a test for evaluating memory strategies: a theoretical and practical introduction is provided for each test as well as norm reference data.
The CD-ROM which comes with the book contains audio files for the auditory attention tests and printable material for administering the questionnaires and tests.