Through a father’s eyes

A journey around what is left of the world 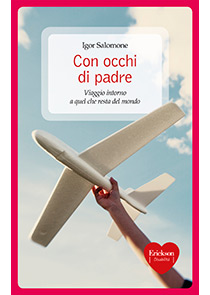 
A man struggling with one of the most difficult roles in today’s world. A professional of education shaken by the quakes of life and a funny, stubborn, beautiful, sweet, unbearable daughter.
This is the story of a father and a daughter. The father talks about the son that lives in every man when his children, being what they are, force him to changes and re-invent  himself. Words of fathers to the fathers and to mothers and children and to women and men who want to hear about what it means to be a father.  A book that was born out of a diary and has turned into a work in progress that has generated meetings, debates, readings and performances.

Fathers are a species in decline, they die by the million in time of war, they vanish in search for their freedom if things are going well and disappear just as much if the chips are down. Of those who stick around, many millions are absent from dawn till dusk, others are away for the whole week and some for whole months. The little time they have at home they spend fantasizing about their own and their children’s future or they lie on the couch all day long. These are the fathers that education manuals advise to jovially tolerate unless they border morbidity. In contemporary culture the fundamental task of a father—to secure a future—has turned into a pastime for immature male adults. Yet, it is the capacity to provide for a child that has generated the idea of future.


Introduction in the form of a letter (Andrea Canevaro)

First part  Diary of a love beyond what’s possible
Ch. 1
Yesterday afternoon
Ch.2
Copy and learn
Ch. 3
Nearby autonomy
Ch. 4
The rediscovered cure
Ch. 5
The anger and the wonder
Ch. 6
Matteo or of luck
Ch. 7
What love is it
Ch. 8
I’m thinking about that tomorrow

Second part  From father to father
Ch. 9
Which father? The beginning of the journey
Ch. 10
Words over time. Letter to my father