I want to be number 2

Because taking part is better than winning at all costs 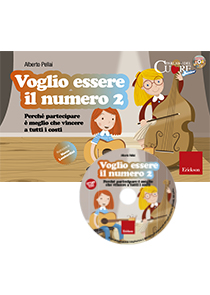 
Caterina is nine years old. She loves making cakes with her grandma and playing the guitar.
She has an older sister, Viola, who never gets anything wrong. She does everything perfectly.
Her mum adores her and says that Viola is number one, not just because she was born first but also because she always comes first. When her mum says these things Caterina can’t control herself and gets mad.
One day, however, her grandma has an idea and suggests that her two little granddaughters do something special…

The story invites us to reflect on how our lives and the lives of our children focus on the exaggerated pursuit of victory. And on how, conversely, it is much better to compete without too much anxiety, valuing friendship and solidarity instead.
A book which goes against the tide, because, in a world where everyone is a champion, it seeks to help young readers feel content to be… number two as well.

The book comes with an audio CD with the story, 3 songs and some suggestions for mum and dad.


IN THE BOOK:
- The story I want to be number 2
- The songs
- Commentary on the story

ON THE CD-ROM:
- The song Talk to me about your heart
- The story
- The songs I'm me and I want to be number 2
- Karaoke versions of the 2 songs
- Alberto Pellai comments on the story which has just been read and offers parents thinking and development points