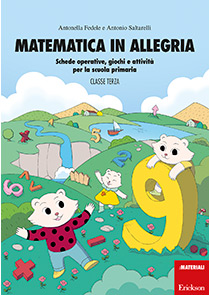 
The third volume in the series, this book guides students on a mathematical learning journey divided into stages of increasing difficulty.

Several different activities are presented: 3 digit numbers, addition, subtraction, multiplication, and division (horizontal and in columns), fractions, decimal numbers, geometric shapes.  Thanks to the lively pictures and scenes featuring the characters from the De Gattis family, the children will be engaged in solving calculations and problems.

–          Addition/subtraction and their properties, word problems