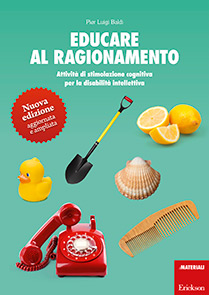 
This book offers a new, revised and extended edition of an original programme aimed at stimulating reasoning abilities in people with intellectual disabilities. Sternberg’s theory on intelligence has been chosen as the basis of this programme because it offers a wide, articulated explanation of the characteristics of cognitive functions. Sternberg identifies the causes of intellectual disabilities as being mainly deficits in certain reasoning abilities, in particular in metacomponents, which play strategic roles in planning, controlling and deciding in thought processes.
Educating in reasoning therefore contains various worksheets on the functional relationships between objects, the ability to establish analogies, classify and determine the causes of certain events, as well as a series of activities aimed at learning to understand objects, learning the meanings of words and improving simple problem solving abilities in new situations.
The programme is made up of more than 100 illustrated, photocopiable worksheets, and can be used, following the sequence it is presented in which is divided according to level of difficulty, from preadolescence to adulthood.