Simplified teaching units from the 19th century to the contemporary world 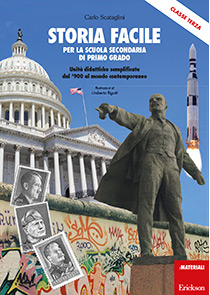 
Designed for all pupils as a supplement to standard text books, but also as support and remediation for struggling pupils , this book follows the history national curriculum for year two of lower secondary school.

Each topic (from the 19th century to the contemporary world) includes:
– concise, simplified texts,
– timelines,
– summarising information maps,
– key concepts,
– tests,
– summary tables,
– reading lists
– ideas for research activities.
The contents are also highly suitable for holiday revision or revision in subsequent school years.
The book contains colour stickers and a timeline poster to make and hang up in class.

Module 1: The new century
Italy after Unification
Colonialism, imperialism and nationalism
The beginning of the nineteenth century in Italy and in Europe

Module 3: The interwar period
The USSR and Stalinism
Fascism in Italy
Nazism in Germany

Module 4: The Second World War
The prelude and the war years
The Resistance in Italy and in Europe
The end of the conflict and its consequences

Module 5: The post-war period
The Cold War
Reconstruction and the «economic miracle» in Italy
Decolonisation
The fall of communism
Crisis in the Arab world
The European Union
Contemporary problems in the world