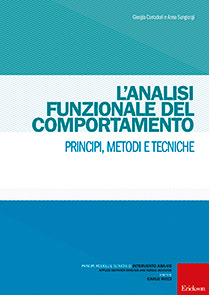 
In everyday life and at work, parents, teachers and operators find themselves facing behavioural problems which are difficult to handle, children and adults who present a constellation and complexity of inadequate behaviours that fuel pessimistic experiences of frustration and resignation. Functional assessment plays a fundamental role in overcoming this impasse, as it investigates the causal processes underlying learning and the maintenance of a behaviour, identifying the function it assumes for the individual. Asking «why» allows us to put the environment back into its central role of triggering, consolidating but also modifying problem behaviours and to assume an effective and individualised attitude in assessment and intervention phases.
The book illustrates the theoretical premises and applications of functional analysis, a tool which allows us to determine problem behaviours in practical terms, highlighting their structure, the variables involved and the reason behind their enactment. The book comes with a series of appendixes containing practical models for applying functional analysis.